Remember back in the Nineties when Michael Jordan had retired from basketball to pursue his dream of playing minor league baseball? After doing that for a couple of years, he decided to come back to basketball by making a simple two-word announcement, “I’m back.” My wife and I had taken our boys up to Chicago for our Spring Break when that announcement came. And Chicago was abuzz with the news, no place more so than Niketown. The boys were so excited, especially #2 because Jordan was his favorite player. They bought Jordan clothing and hats that day. And, all seemed right in the Keller universe.

Well, I took last week off just to hang out with my wife during her Spring Break this year. And, instead of traveling, we spent the time getting ready for Son #2’s wedding and the arrival of our first grandchild this summer. It will be an exciting time in our home this summer.

So, what do all of those anecdotes have to do with my blog? Whenever we spend Spring Break at home, we clean the house. So, while during one of our cleaning sessions, for some reason, I was listening to an album that was important to me in 1976 and 1977. I am not sure why I played it, but something compelled me to put it on the old turntable. The album was Alice Cooper’s 1976 album about Cooper’s fight with mental illness and alcoholism entitled Alice Cooper Goes to Hell. And, who knew that this album, considered to be one of Cooper’s worst helped me through one of the most difficult times of my life.

Let’s go back a bit to remember that the name Alice Cooper originally was the name of a rock band of five guys from the same high school track and field team from the Detroit area. But, as the group’s popularity rose, the band’s name became associated with the lead singer, the former Vincent Furnier, and less with the other four men in the band. That’s why Alice Cooper is now the stage name and character of Mr. Furnier. Anyway, like most kids my age, I became intrigued, then obsessed with Alice Cooper. Why? What kid doesn’t love to have their favorite artists push the buttons on our parents? These guys not only played great, loud, simple rock songs, but they put on a huge show. Now, you understand the popularity of Marilyn Manson back in the Nineties.

Now that I am forty-plus years removed from those days in 1976, I can analytically describe just how this album helped me through my parents’ divorce. I had always been close to my dad leading up to that last day of school in seventh grade, when he told my brother and me that he was moving out of the house to think things through. I was devastated. I felt betrayed because he was always my buffer between my mom and me. And, now, I was being thrust into a family leadership role for which I was not prepared. 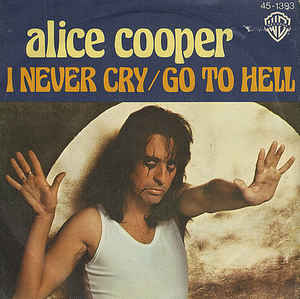 Enter Alice Cooper Goes to Hell. During the summer, I fell in love with Cooper’s ballad “I Never Cry,” which totally seemed to be describing my emotions at this juncture in my life. All of a sudden, I went from totally clueless to self-conscious in the snap of a finger. Now that I am older, I realize what my strengths and weaknesses are, but, as a teen, you have no clue of them unless something dramatic occurs to force them to the fore. Immediately, I discovered I was something of a “paid extrovert.” What I mean by that, is that I am very insular by nature, but when thrust into a group, I like to entertain. However, if it is a new group, I prefer to disappear. So, often, as a teenager, I was probably known as someone who was “stuck up” at worst, or “aloof” at best. But, I couldn’t help it. That is just my own brand of weirdness.

So, Cooper’s “I Never Cry” really described my reaction to the impending divorce of my parents. At the time, I was blindsided by the announcement from my dad, because I thought everything was fine. And, no matter how much I tried to turn on my emotions, I just couldn’t cry. I had purchased the seven-inch single of this song initially, but I immediately knew that I wanted to get the album.

Since the album was entitled Goes to Hell, the public worked themselves up into a lather of ignorance thinking this was an album of Satanism, never considering in their narrow, ignorant minds that someone’s life could be considered “going through hell.” Oh no! Heaven forbid that artists use metaphors, because they aren’t smart enough. Maybe, it was the complainers who weren’t smart enough to understand what a metaphor is and how it is used. But, let’s not learn, let’s complain. I am so glad that my generation is carrying on with these acts of stupidity. That is why the Boomers and X-ers are so easily manipulated by Wall Street, Political Animals on FOX, and the mantra that business will cure all society’s ills. But, those are arguments for another day, so let’s stick to Alice Cooper.

The album, Alice Cooper Goes to Hell (ACGTH), describes Vincent Furnier’s descent into mental illness and alcoholism. In the terrific opening song, “Goes to Hell,” a chorus of parents and concerned citizens condemn Cooper to Hell for leading our children astray, while this whole scene is simply a concoction in Furnier’s mind due to mental illness. As the voices in his head try to pull him in different directions, the music changes from a Broadway take on disco with “You Gotta Dance” to the faux confidence found in the bottle of “I’m the Coolest”. Those mental personalities seemed to be played by people in Alice’s life, whether it is protestors, radio kingpins, record producers, music agents, fans or family, you are witnessing the mental decline of Furnier along with Cooper’s own entertainment descent. When you begin to realize that this is a Shakespearean play taking place simultaneously within Furnier’s mind AND Cooper’s career, then you understand why the artist Alice Cooper made the musical choices he made as he was turning away from his bread-and-butter hard rock persona of just two years ago.

Vincent Furnier made his most “real” album to date with ACGTH. And, while this album is often correctly described as “indulgent,” the critics have missed the big point of this being a rock opera of the state of one’s mind as well as one’s career. And, for some reason, I saw through the whole thing as a thirteen year-old suffering through the pain of the end of his parents’ marriage. ACGTH is a beautifully poetic album that in the right hands, and if coupled with Cooper’s previous album Welcome to My Nightmare, would make a terrific Broadway play, so long as the director can simultaneously play up the inner and outer dichotomy of oneself.

Thanks, Alice! Your willingness to make your art real saved me at juncture in my life when I needed it the most. You will never understand how important that album was to me. And still is, it appears.